On Saturday, Ashlyn and I were invited to watch the semifinals of the BMW NZ Polo Open, which was held at the Auckland Polo Grounds, by an old friend-of-a-friend named Mat Norris. 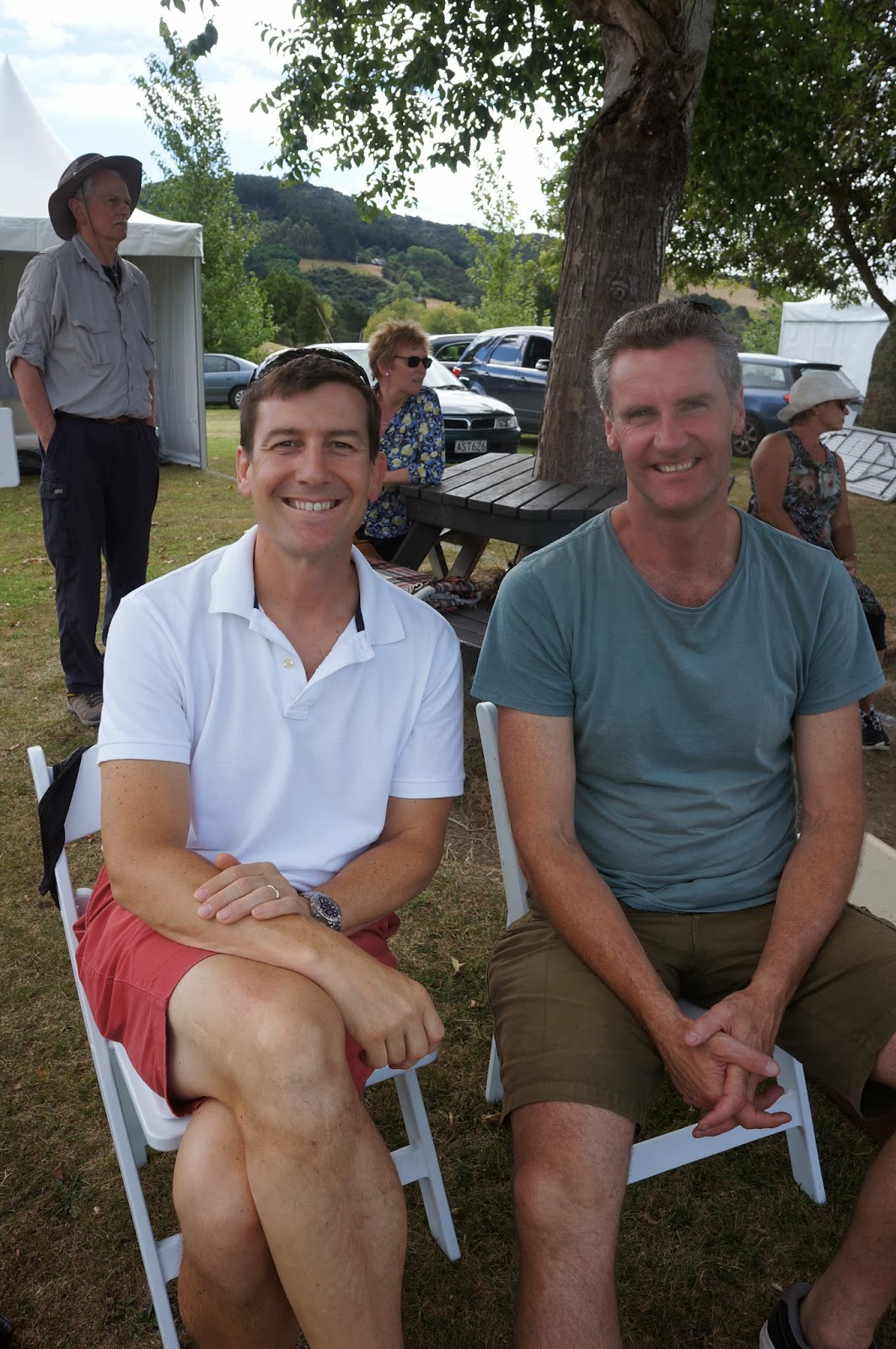 Mat is what some New Zealanders would refer to as a “good keen bloke”.   Mat became friends with two of my dearest college friends, Cammy and Marion, when they were all working in Kodiak, Alaska not long after we graduated from college, about 20 years ago.  Mat has stayed in touch with Cammy and Marion ever since and I actually met him back then when he visited Cammy and Marion on the East coast in the early 1990s.  Marion recently dug up a photo of us in Washington DC from that trip (none of us have aged a bit, right!). 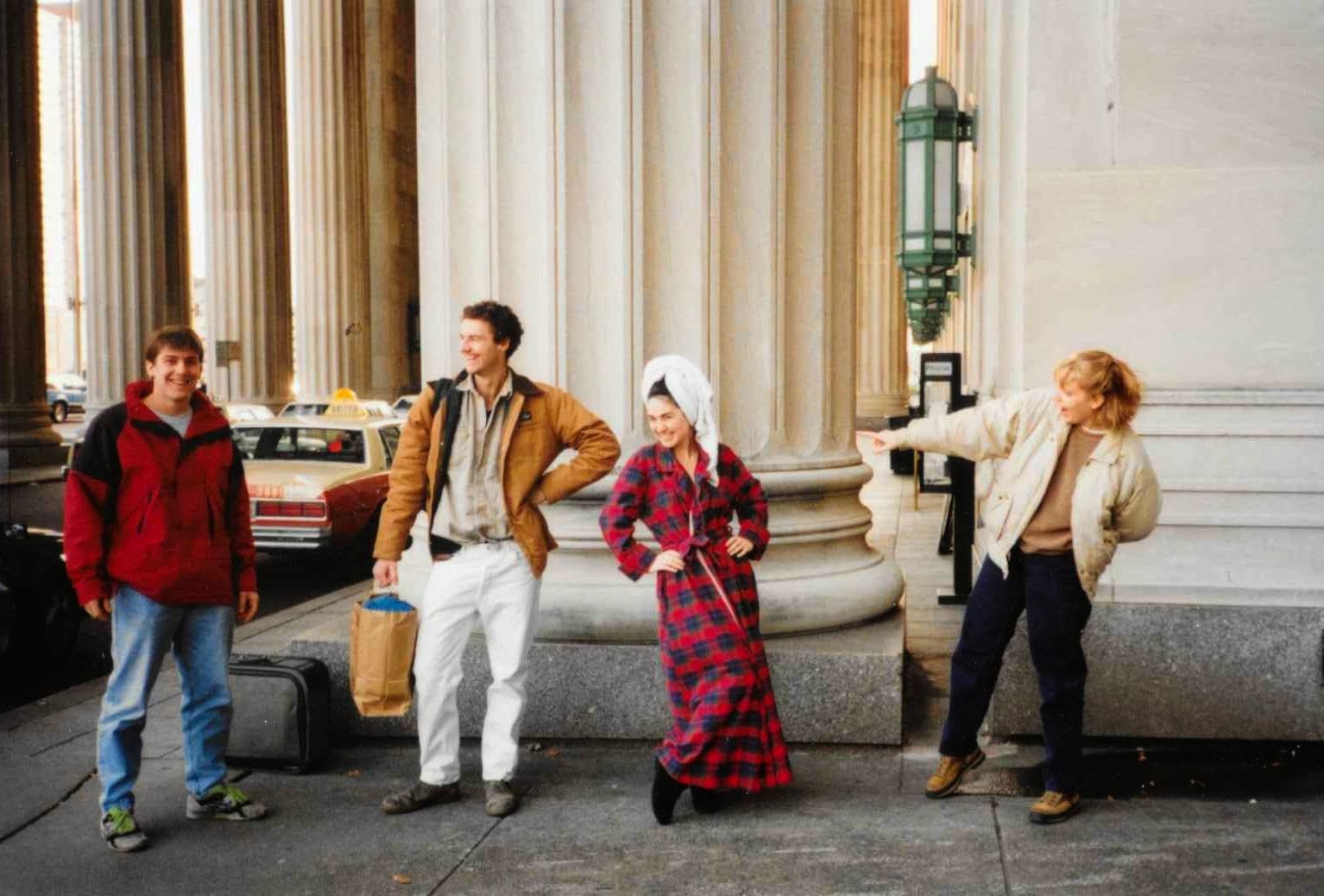 When Ashlyn and I started to plan our sabbatical, Cammy put me back in touch with Mat so that we could reconnect once we got to New Zealand.  Mat was nice enough to give us a ride from the airport to our rental house when we arrived in Auckland, and as if that wasn’t enough, Mat loaned us his car the first three weeks that we were here because he was headed over to Australia for a three-week trip.  Talk about going above and beyond the call of duty!

So on Saturday, we arrived at the Auckland Polo Grounds to watch our first polo match ever.  Polo is played with four people on a team and the match is divided into six periods (called “chukkers”), each lasting 7 minutes.  Polo fields are the largest fields of any organized sport, and interestingly, most players at that level have a different horse for each chukker (6 horses just for one match!).  One of the important things to know if you ever watch a polo match is that every time a team scores, they switch ends, so it can be a little disorienting for a spectator at first.  There’s not that much in the way of safety gear – a helmet, some elbow and kneepads, and that’s about it.  Here’s Luke modeling some of the gear. 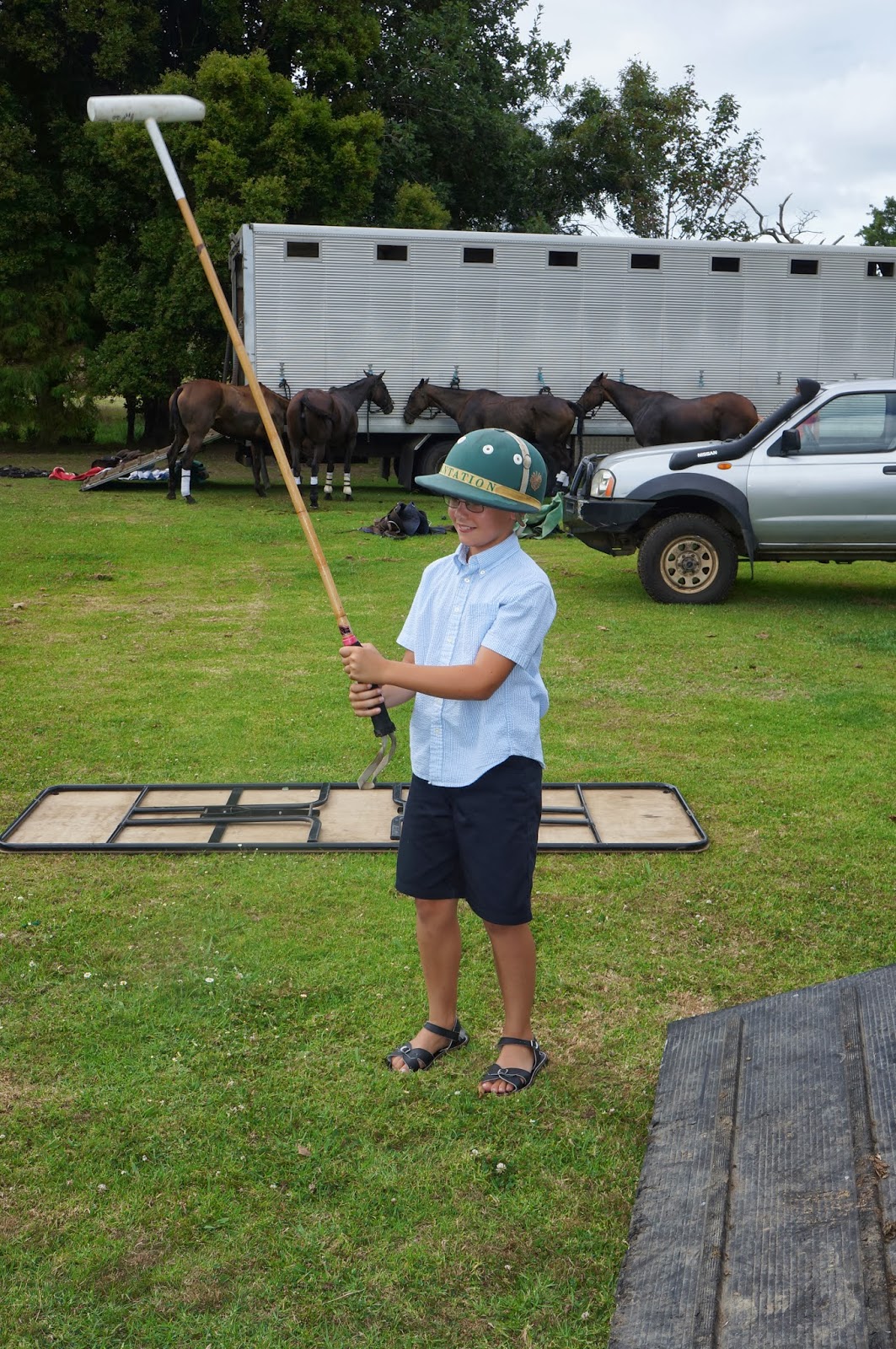 I learned three important things about polo on Saturday.  1) Polo is FAST.  It was amazing to see how quickly the game moves up and down the pitch, and how easily the riders turned the horses back and forth as the play moved around the field.  2) Polo is LOUD.  The stomping hooves, the frantic breathing of the horses, and the screaming riders all make for a very exciting atmosphere even without the commentators.  3) Polo is DANGEROUS.  The riders hit the ball incredibly hard (upwards of 110 miles per hour!) and can effortlessly lift the ball in the air so it’s amazing that more people don’t get whacked in the head or the face by one of the balls. 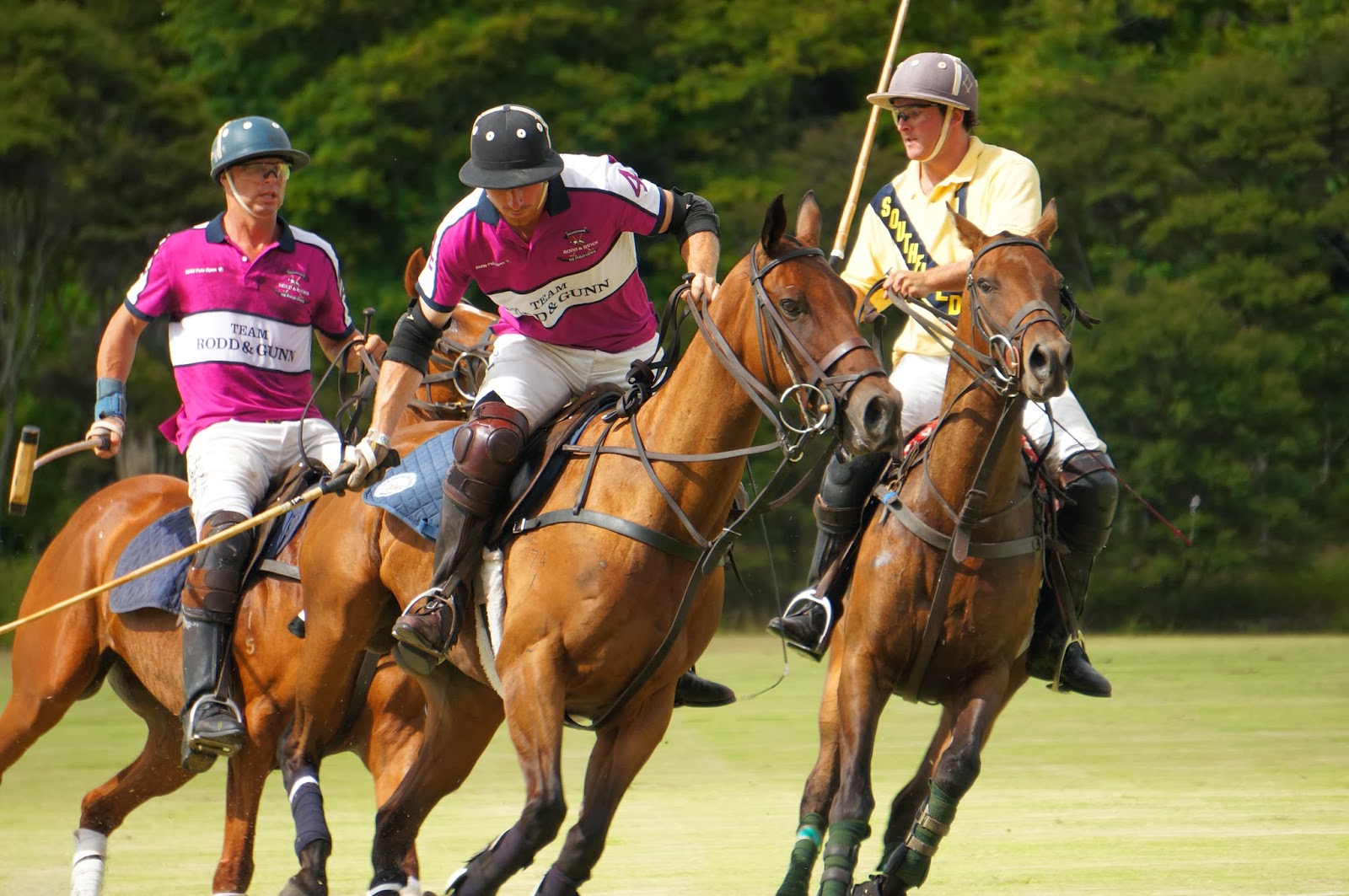 In the match that we watched, “Rodd & Gunn” defeated “Southfield” 11-7 to advance to Sunday’s final.  We didn’t go to the finals on Sunday, but it was apparently a much fancier affair with cocktail parties, corporate tents, a fashion show, etc.   It was really great to watch the match on Saturday, and while I don’t think I’m going to start following polo on a regular basis, it was certainly another fun new activity that I’m thankful we were able to try while we’re in New Zealand. I’m also very thankful to re-connect with Mat after all these years and to be able to spend some time with him while we are in Auckland.  Thanks Mat and “good on ya, mate”! 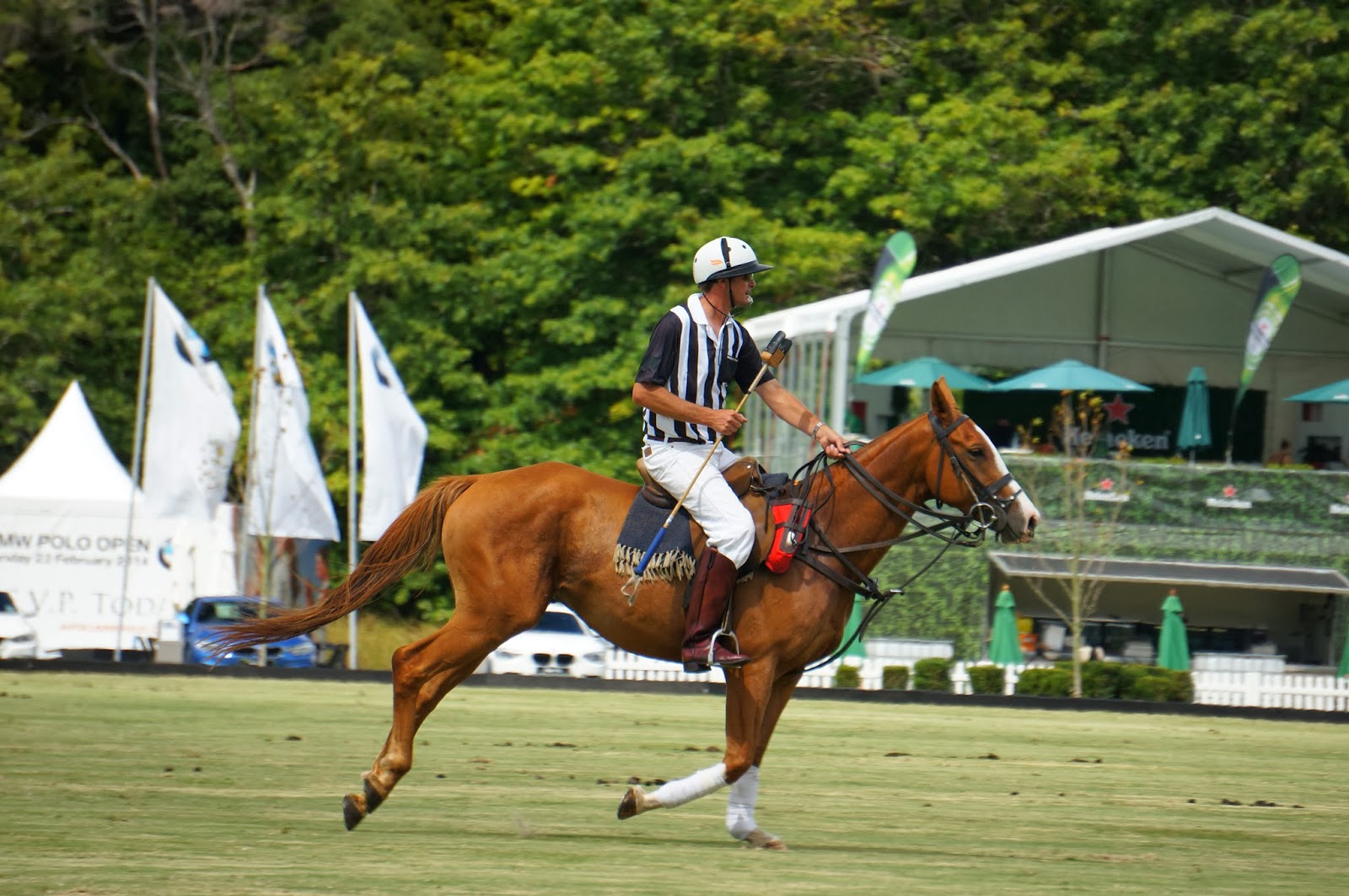 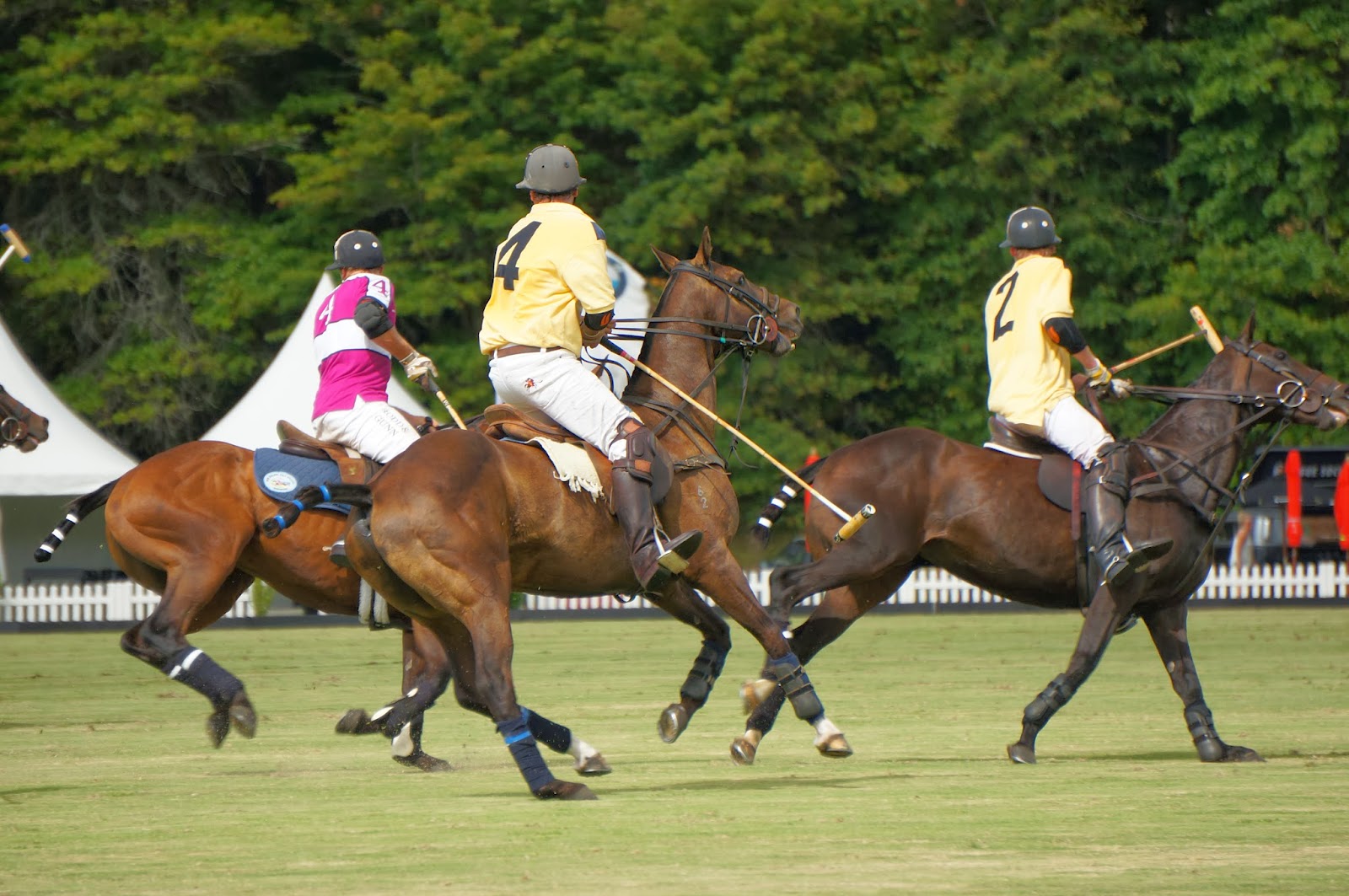 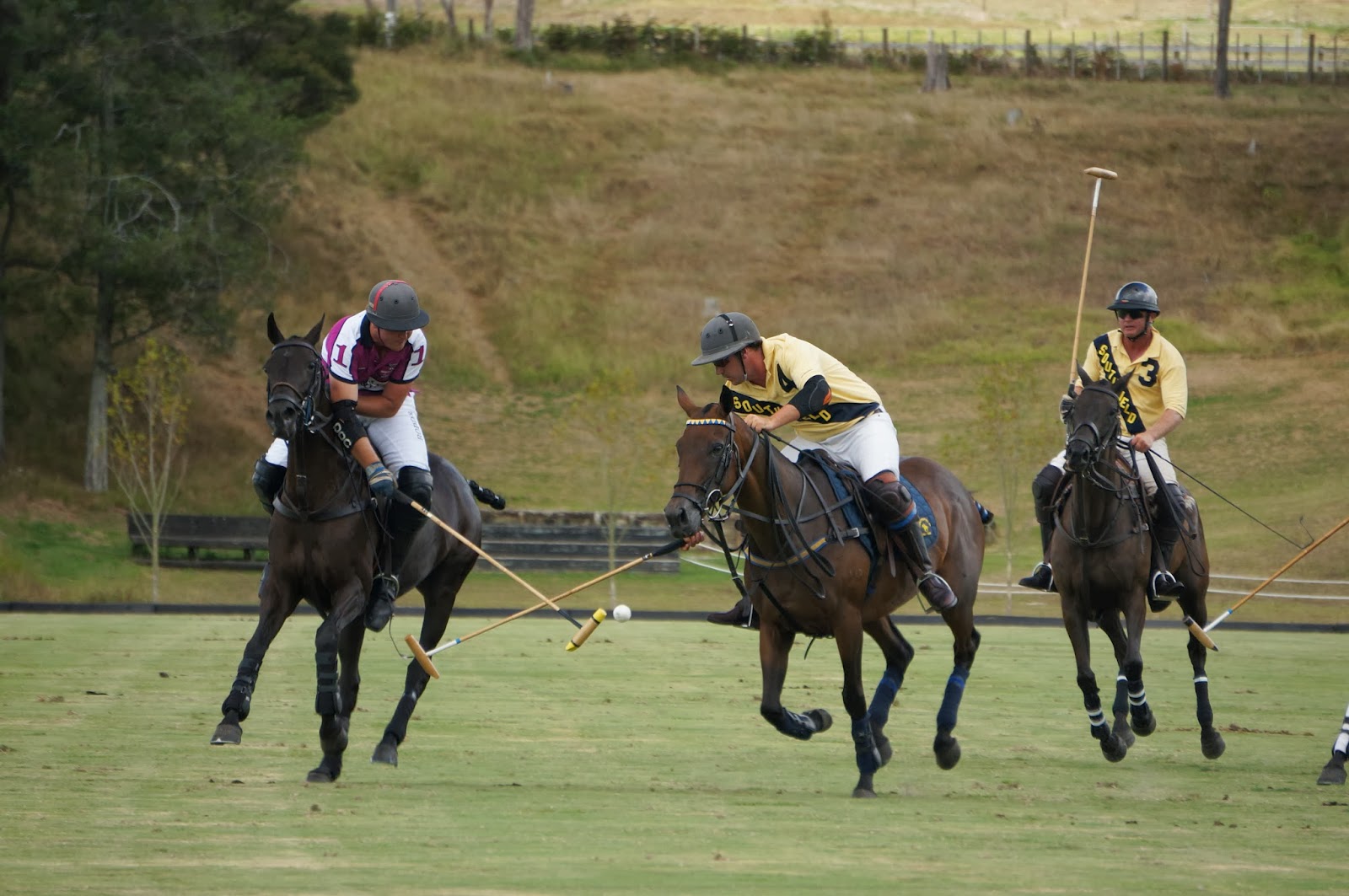 One thing that is different here from America (and a little confusing) is coffee. Here they don’t drink filter coffee. Most of their drinks are espresso-based, and don’t involve pots or coffee filters. A basic coffee menu would usually consist of:

Short Black (a shot of espresso)

Long Black (a shot of espresso served over hot water)

Macchiato (a shot of espresso with frothed milk)

Mocha (hot chocolate with a shot of espresso)

Latte (a shot of espresso with lots of hot milk)

Most drinks are around four dollars, but larger sizes are more expensive, obviously. Iced drinks are a lot more expensive than hot ones, for some reason. Some cafés also serve “fluffies”, which are just foam with flavorings like cocoa powder, mostly for kids.

They do have Starbucks, which mostly serves espresso drinks but will probably make filtered coffee if you ask, as would some restaurants and cafés.

The best part of the coffee, in my opinion, is how beautifully it’s served. They have barista schools where people can train to make pretty designs in coffee drinks. These designs often come on mochas, like the ones in the pictures. We met a coffee shop owner in Taupo who claimed that for the town’s Iron Man Triathlon, their barista could create the image of a runner, biker, and swimmer in their coffee!

Oh, and none of these mochas tasted half bad, either.

While some compare Rotorua to Vegas, I found it much better!  After our afternoon in Hobbiton, we headed on to Rotorua for a few days.  This area is marketed as “where Kiwis go to play” and there is plenty of fun stuff to do.  We stayed in a middling hotel, but its best feature was the incredible view of the Pohutu geyser (New Zealand’s largest), which erupted frequently during our trip thanks to a little rain.  Rotorua is known for its geothermal qualities ranging from geysers to hot springs to bubbling mud pools.  It’s a tangible reminder that New Zealand was formed by volcanic activity and some of it is still happening. 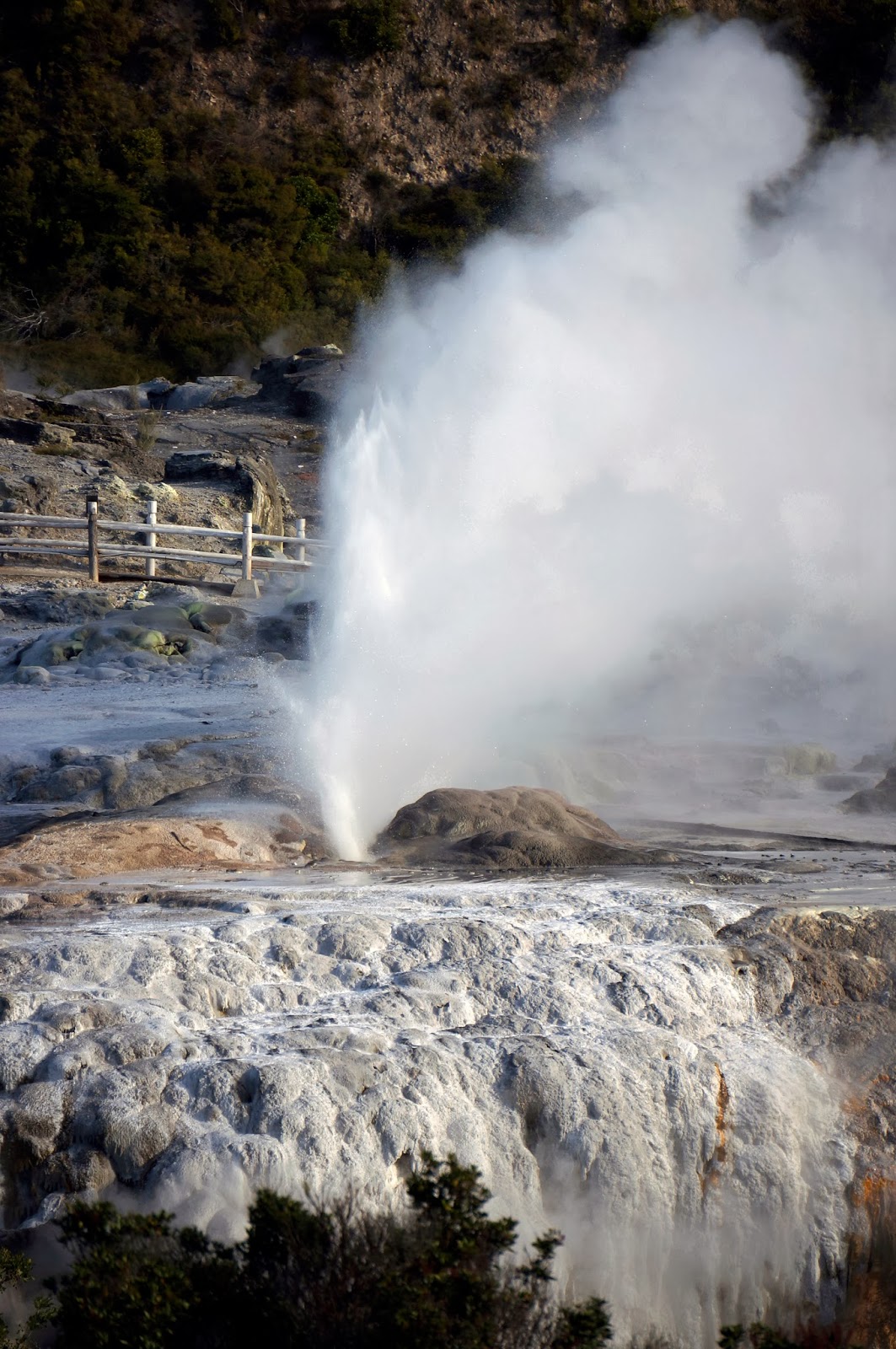 We had a good taste of Maori culture and food by visiting the Whakarewarewa (say that three times fast!  The “Wh” is pronounced like an “f”) Living Maori Village. We had a great tour and enjoyed a performance as well as a hangi meal that was cooked in the natural boiling water right on the premises.  Luke enjoyed seeing the Maori chanting and challenges and has become quite taken with the haka, a traditional war challenge, which rugby teams often do before games. 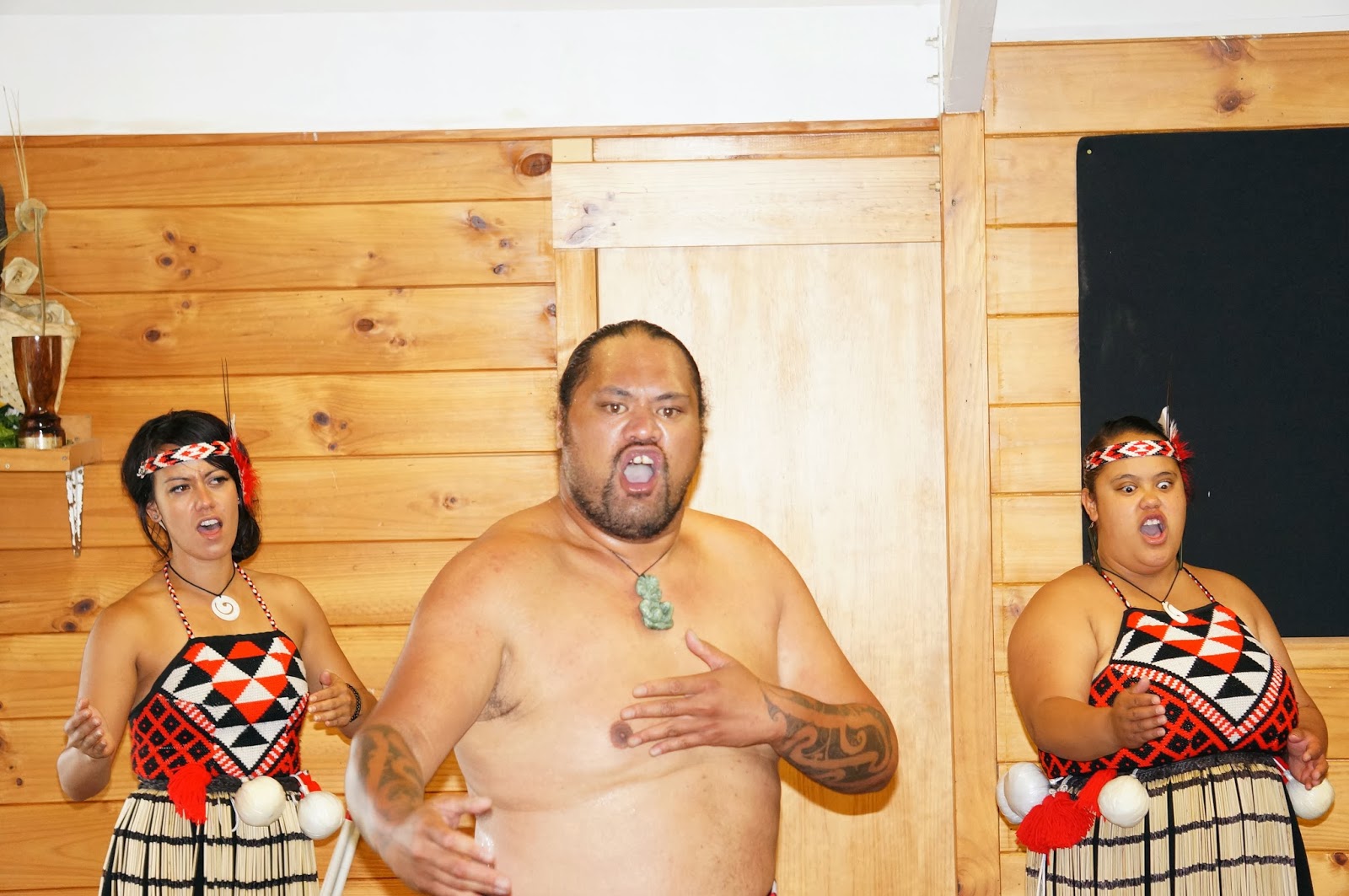 We visited the Rotorua Museum, which is the most photographed building in New Zealand.  It was once a bath house and spa, where visitors travelled weeks by steamboat to stay and be treated for various maladies or just relax.  The museum features videos with one of New Zealand’s most famous actors, Tem Morrison, who is a native of Rotorua and who you might recognize from “Once Were Warriors” or probably as Jango Fett from Star Wars.

Taupo is close by, so we popped down one day to see the beautiful blue and green lakes, eat great Turkish food, and enjoy the shopping and playground.  We could do a whole blog (and maybe we will) on the amazing playgrounds and fun equipment for kids of all ages.  We also went to several waterfalls including the powerful Huka Falls.  I chose this photo of Okere Falls, because if you look closely at the bottom left you can see the kayaker who had just come down! 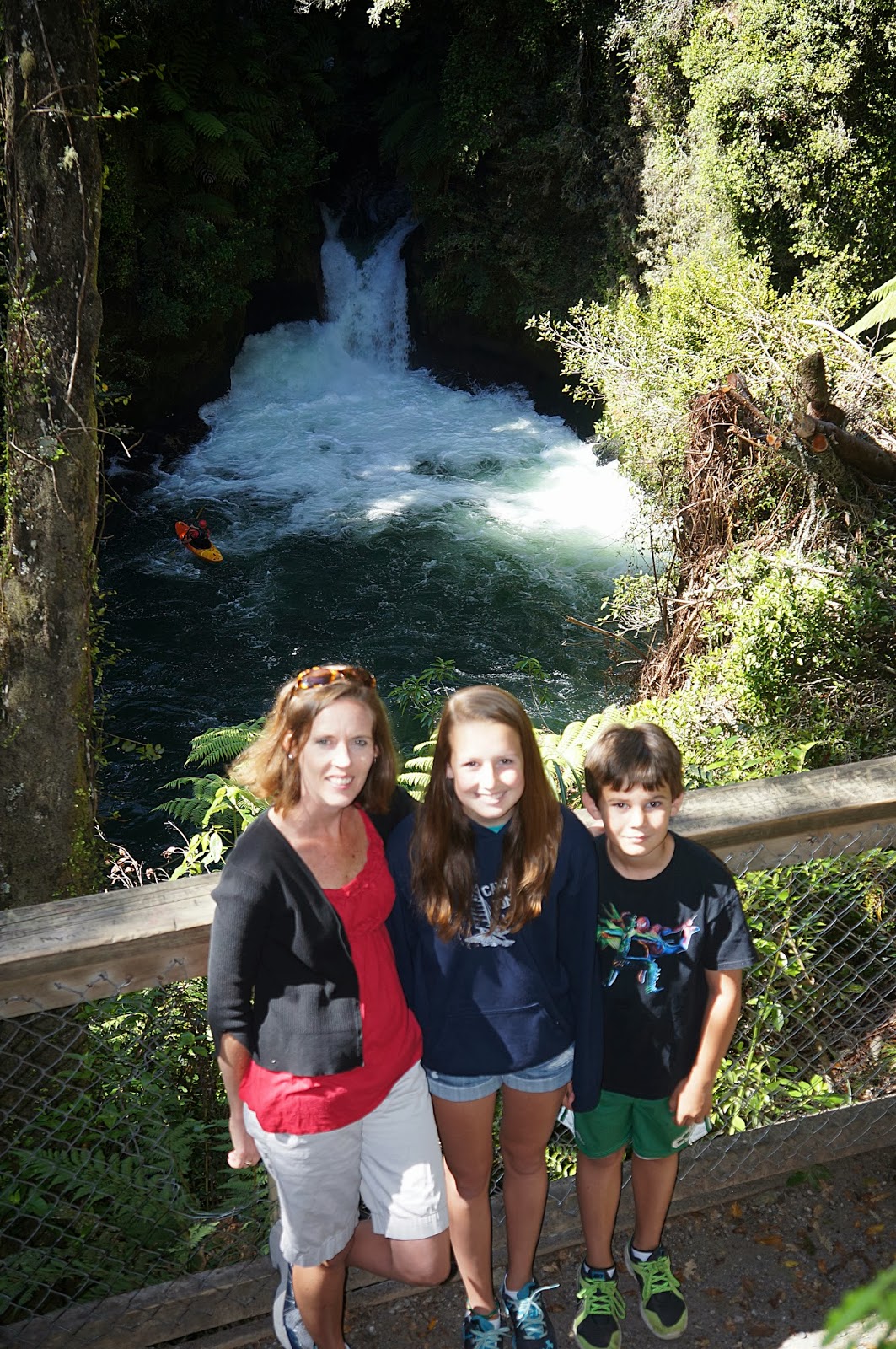 Our last stop was Skyline Rotorua where we took a gondola ride up the mountain for beautiful views of the lake.  We came down a few times on the luge ride and got to ride back up on the ski lift.  You’ll see Luke and Kevin here with their luges attached.  Definitely worth doing again! 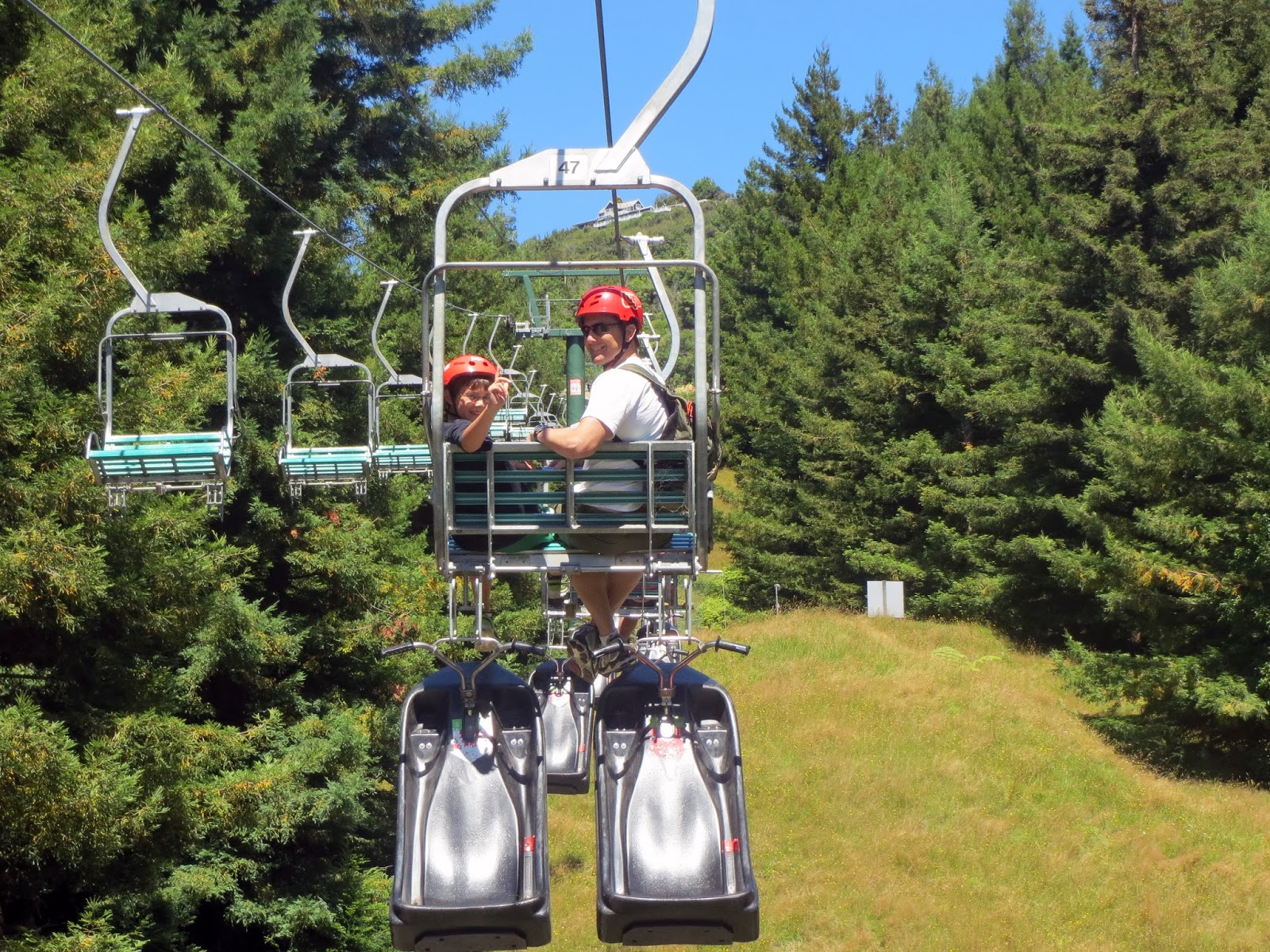